From Monday the 9th until Saturday the 14th of July, 20 early-career researchers participated in the EADM summer school 2018 in Salzburg, Austria. The summer school was hosted by Anton Kühberger (University of Salzburg, Department of Psychology) and Michael Schulte-Mecklenbeck (University of Bern, Max Planck Institute for Human Development), and consisted of several interactive workshops, keynotes and ‘meet the scientist’ sessions. The theme of this year’s summer school was Open Science in Decision Making Research.

Its aim was twofold: 1) to get to know process tracing, and 2) to “unfuck” psychological science.

Participants did most of the tasks in small groups of 4 – foremost they participated in a mouse-tracking workshop (run by Pascal Kieslich and Dirk Wulff) that included designing, building (in Open Sesame), pre-registering (at OSF), running, and analyzing (with the R-package Mousetrap) a mouse-tracking experiment. From the main project each group forked their own project and pre-registered their study.

Here are summaries of the 5 studies run:

Group 1: The study compared participants’ food choices between healthy and unhealthy foods after being primed with thin (‘healthy’) or wide (‘unhealthy’) body silhouettes, or neutral stimuli (rectangles with horizontal stripes). Primes were flashed briefly (for 150ms) before each mouse-tracking trial. If priming had an effect on participants’ decision-making, mouse trajectories should show greater deviations from a straight path from start to the healthier choice when presented with an unhealthy prime, and similarly for unhealthier choice when presented with a healthy prime. No significant differences were observed in choices or mean mouse trajectory deviations across priming conditions.

Group 2: This study investigated the role of ambiguity attitude in risky choice. Subjects made choices between an ambiguous lottery and a risky lottery. Through a mouse-tracking experiment, it was found that when the probabilities of the risky lottery were close to an individual’s switching point (point of indifference between risky and ambiguous option), the conflict between the two options was biggest. There was no significant difference between high outcome and low outcome lotteries; while there was a marginally significant difference between gain and loss. The magnitude of the outcome moderated the effect.

Group 5: The study examined how people respond to true, false, and paradoxical statements in a mouse-tracking experiment. A previous study (Rudnicki and Lukowski, in prep.) found that people show similar EEG patterns when exposed to false statements (‘This sentence is in Spanish’) and to a liar’s paradox (‘This sentence is wrong’). Based on the hand-movement paradigm (Spivey et al., 2005), we hypothesized that this EEG pattern should replicate in a mouse-tracking experiment. The pre-registered hypotheses stated that the false and paradoxical statements will each result in a greater mean average deviation (MAD) than the true statements. Our results indicate indeed a similar pattern of MAD to EEG.

Ingroup favoritism and discrimination against the outgroup are pervasive in social interactions. I will present a set of studies using eye-tracking technology to uncover the cognitive processes underlying the decision to be more generous to members of their own group relative to out-group members. In two studies, we find systematic differences in information search effort, specifically increased response times and number of fixations, and more inspected information when facing in-group vs. outgroup members, especially among ‘pro-social’ individuals who value others’ outcomes more rather than less. Whereas individualistic decision makers invested relatively less effort into information search when decisions involved out-group members, those with pro-social value orientations showed more similar effort for in- and outgroup decisions. Implications for intergroup research and resolutions for intergroup conflict will be discussed.

In this talk, I am concerned with three seemingly conflicting sets of findings, interpretations and conclusions in research on behavioral decision making. Beginning with the description-experience gap in contemporary research on human choice, I argue that experienced-based decisions result, at least to some extent, in systematically different behaviors than description-based decisions. Taking advantage of this distinction, I then turn to what one may call a gap in human (bounded) rationality that emerges once two research programs are compared: the intuitive statistician program and the heuristics-and-biases program. Finally, I propose that this rationality gap has given rise to two distinct approaches to public policy interventions, based on behavioral science evidence demonstrating people’s decision making competences or lack thereof: the nudging and the boosting approach. In my view, there are good reasons and evidence for the respective intellectual positions — that is to say, no funeral is being proposed — but it is important to understand these sustained and profound different portrayals of the human mind and their methodological and theoretical origins.

The main goal of the Harding Center for Risk Literacy is to help people in their struggle to understand and assess the risks they face and to make sound decisions under uncertainty. Our main focus is on health and medicine. By conducting studies, experiments, and surveys, we investigate people’s problems with understanding numbers and dealing with uncertainty and find solutions to these. In my talk, I will discuss some of our experimental work as well as some of our collaborations with different health care institutions (e.g., health insurances) to demonstrate how we can help doctors and patients make sense of health statistics and improve their decision making. I will also present ready-to-use evidence-based and data-driven decision tools for doctors and patients that empower both experts and lay-people to make better medical decisions.

The whole group in front of the University of Salzburg entrance 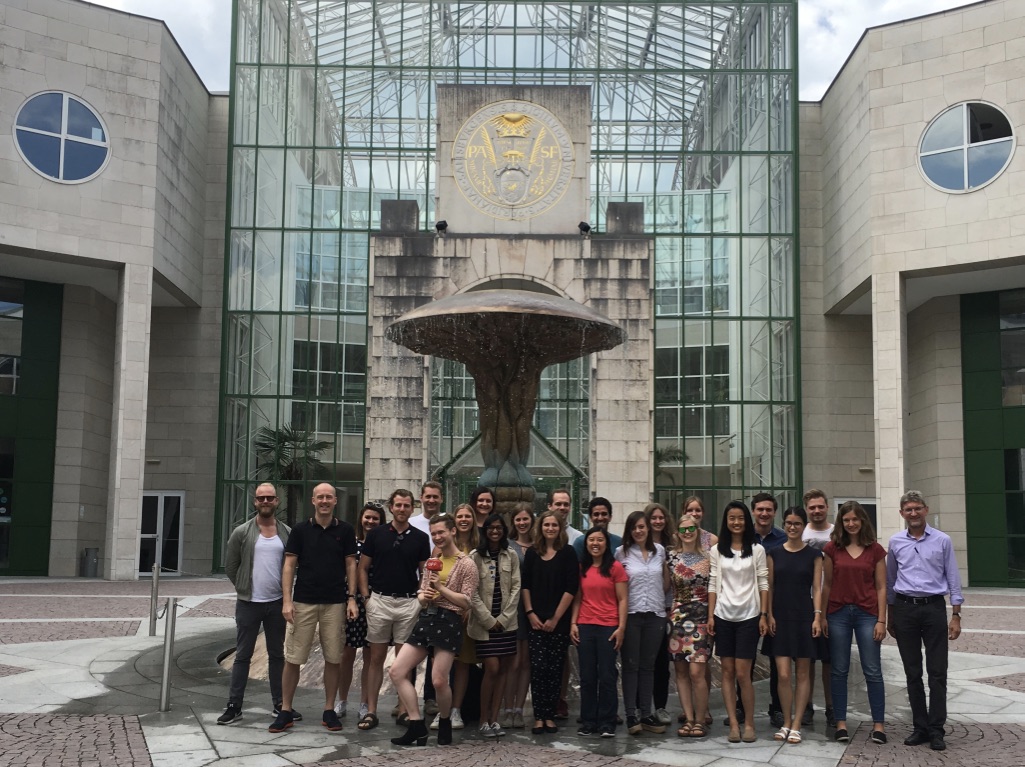 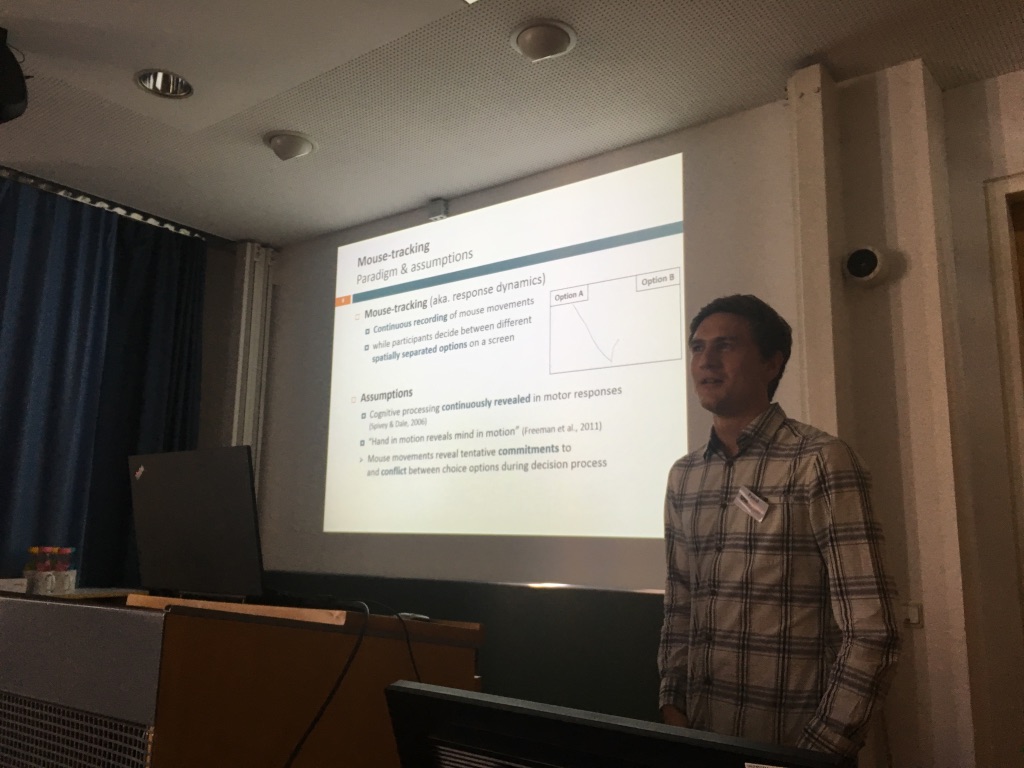 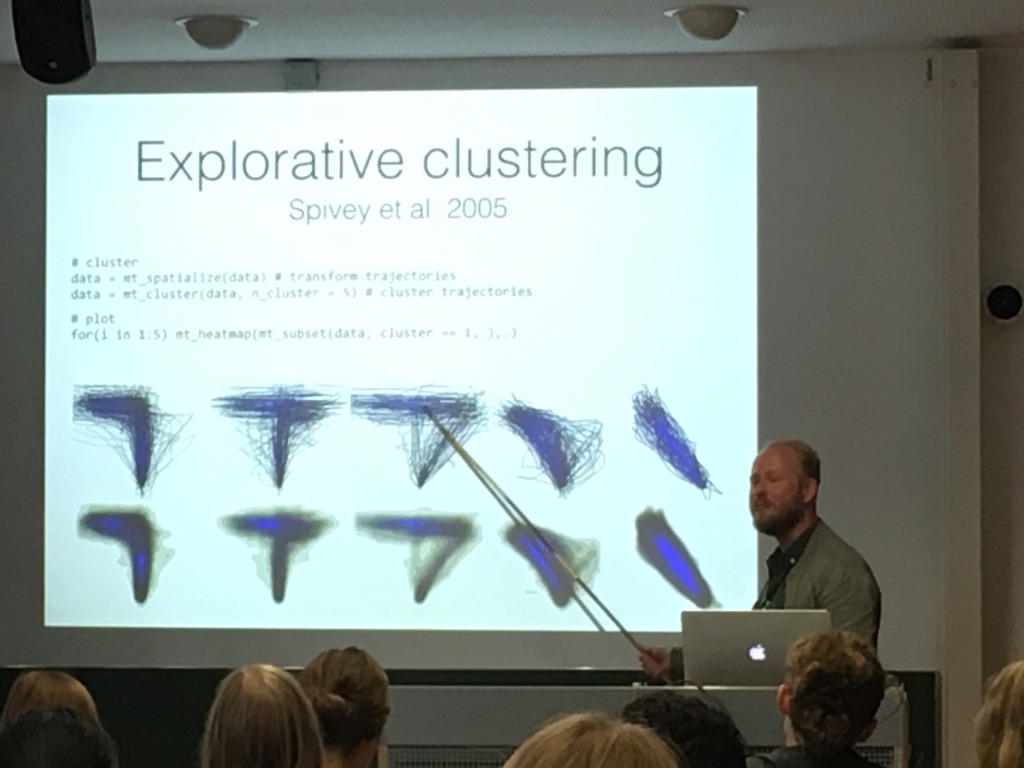 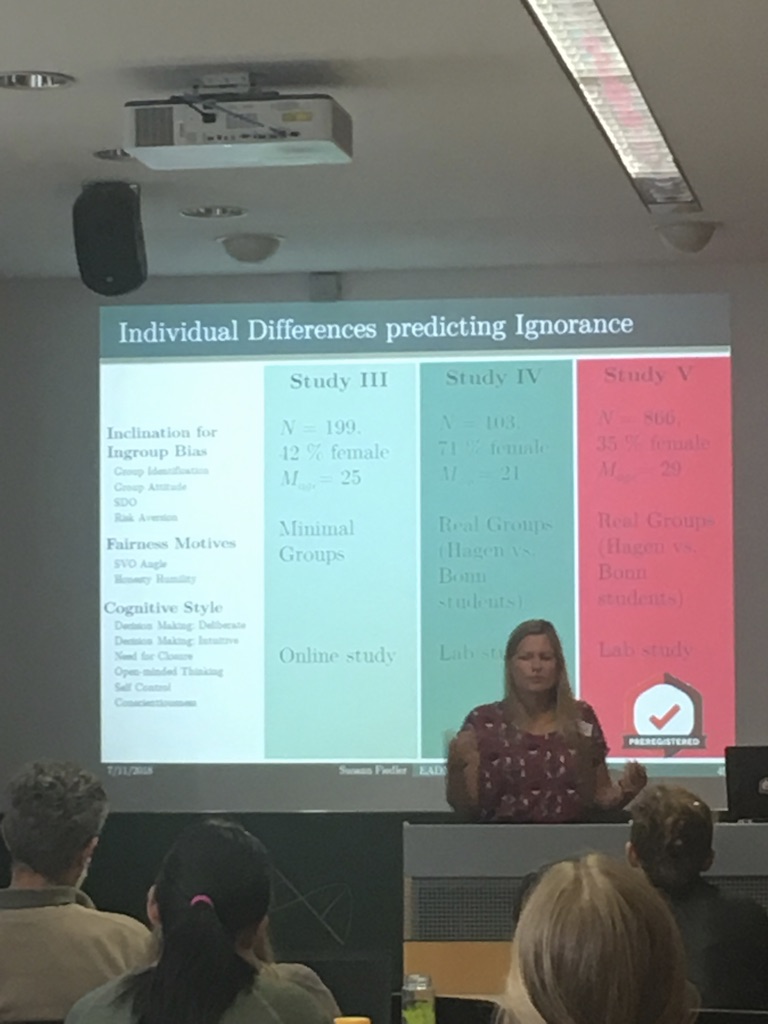 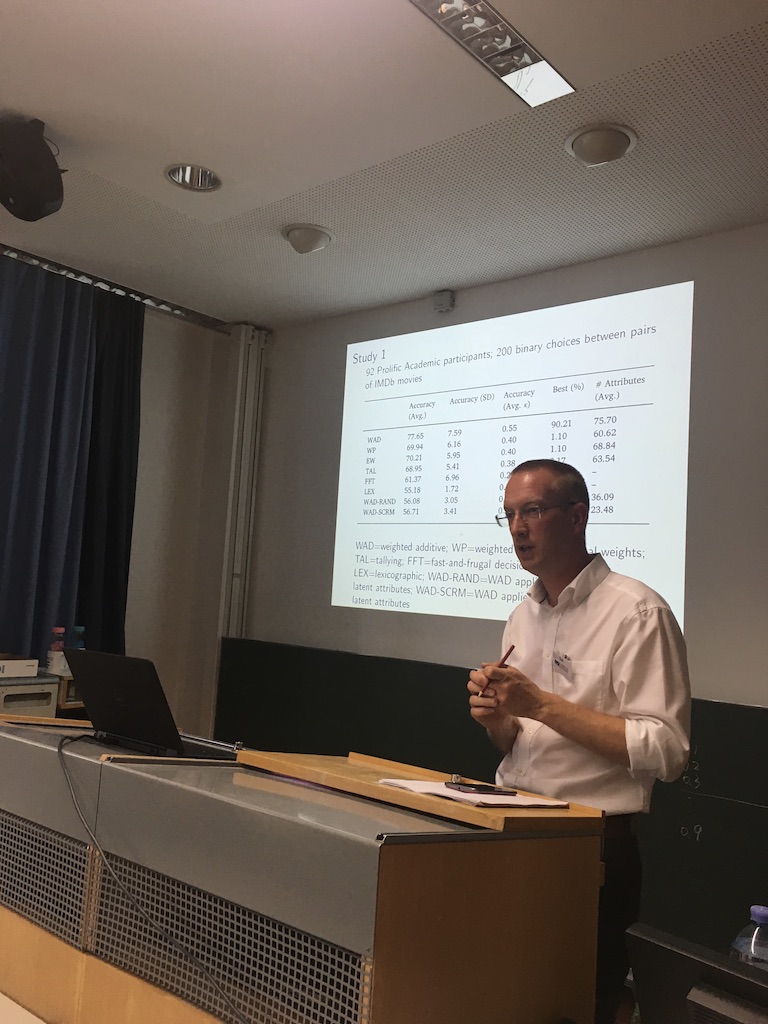 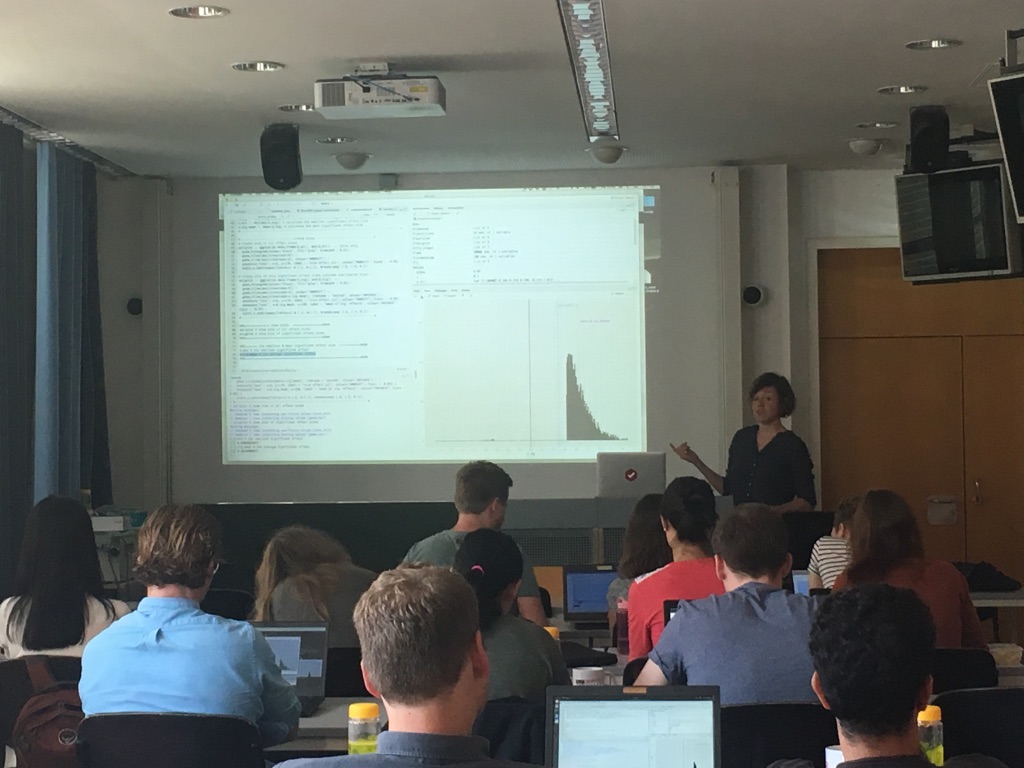 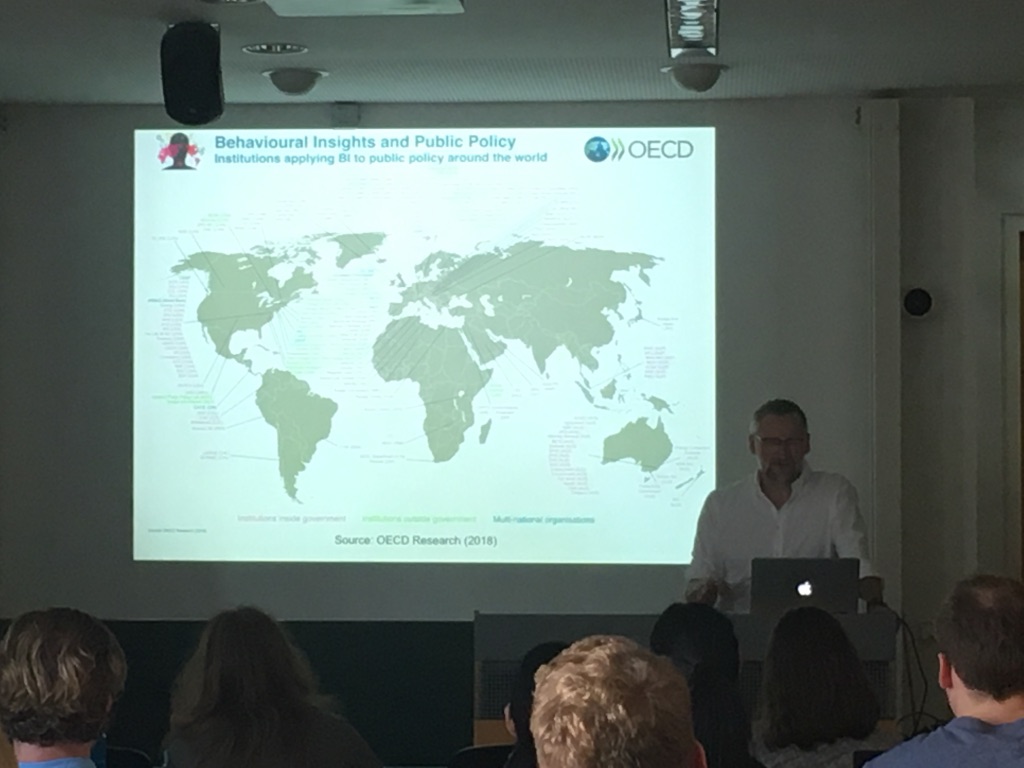 Ralph Hertwig talking about the world 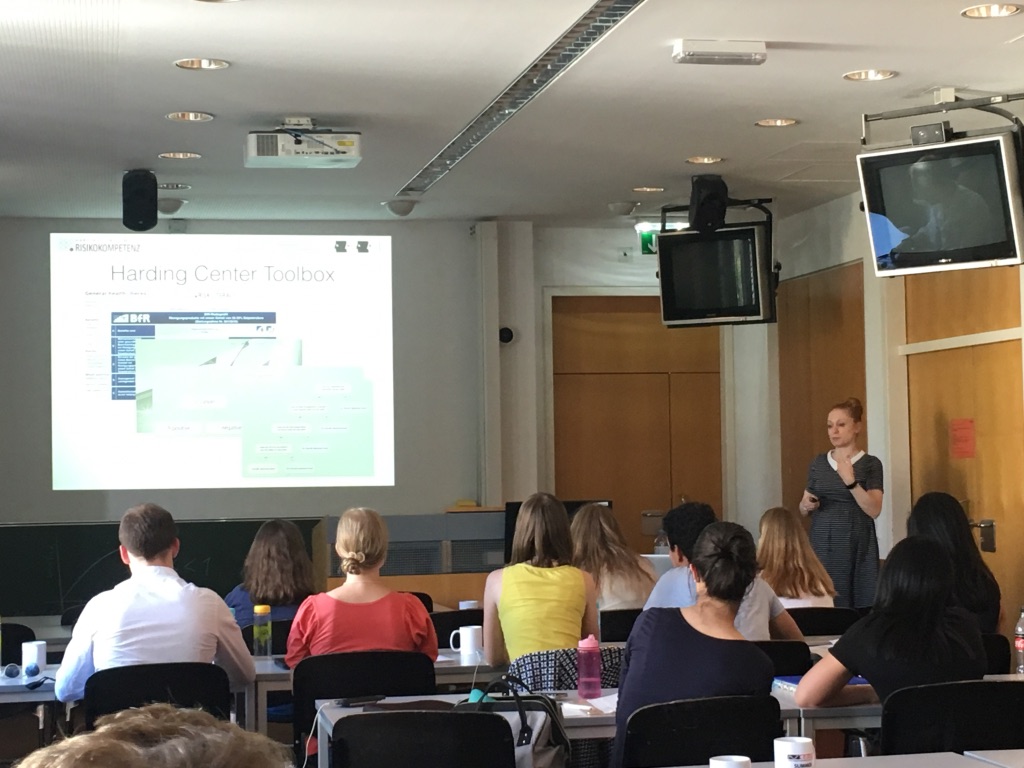