The European Association for Decision Making (EADM) is an interdisciplinary organisation dedicated to the study of normative, descriptive, and prescriptive theories of decision making.

It has it origins in a Research Conference on Subjective Probability, organised in 1969 by Wendt, Stael von Holstein and Vlek in Hamburg. From 1971 the conferences broadened their scope to Subjective Probability, Utility and Decision Making (SPUDM), and were organised biannually in venues all over Western and Eastern Europe. The Association was founded formally in August 1993. 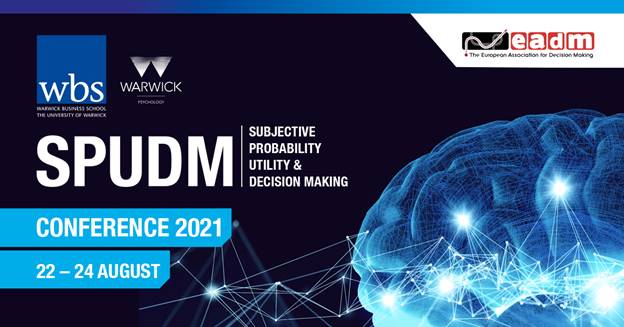 The European Association for Decision Making invites submissions for presentations, posters and/or symposia for the 28th Biennial SPUDM (Subjective Probability, Utility and Decision Making) Conference which will be hosted online by Warwick Business School and the Department of Psychology at the University of Warwick, UK, from 22 – 24 August 2021.

SPUDM has been the leading European decision making and behavioural economics conference since its inception in 1969. Those years have seen SPUDM host the greatest researchers in our field, and we are committed to keeping this tradition alive and making this 28th meeting, the first to be held entirely online, one of the very best.

Our keynote speakers include Rory Sutherland (Vice Chairman of Ogilvy &
Mather Advertising) Gaëlle Vallée-Tourangeau (President-elect EADM) and Ilana Ritov, of the Hebrew University of Jerusalem. There will also be a special guest appearance by Daniel Kahneman, who will field questions about his forthcoming book Noise (co-written with Oliver Sibony and Cass Sunstein).